Speaking via video, Li Zhenguo shared his insights on how corporate actions and commitments can help bolster biodiversity protection. He provided an update on LONGi’s Baoshan production base in southwest China’s Yunnan Province, the pilot plant for LONGi’s net-zero transition.

At the first phase meetings of 2021 UN Biodiversity Conference (COP 15) held in China’s Kunming, LONGi announced an ambitious plan to convert its Baoshan plant in Yunnan into its first “Zero-carbon Plant” by 2023.

Li said the Baoshan plant is one of LONG’s most important upstream manufacturing facilities of the PV industrial chain. “We are making steady progress to deliver our very first zero-carbon plant in Baoshan,” he added. 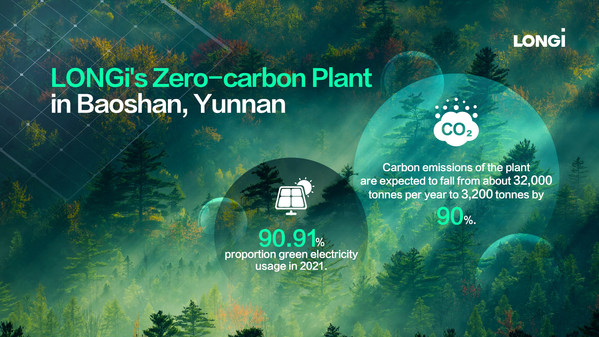 Li said LONGi would increase the use of renewable power in the Baoshan plant to 100% for day-to-day manufacturing and operations, up from 90.91% green electricity use in 2021.

Li said that a digital energy management system has also been deployed in Baoshan plant to improve energy efficiency. In 2021, the unit consumption of PV products made in LONGi Baoshan plant reduced the carbon footprint by over 8%. LONGi’s Baoshan plant has completed the Scope I and Scope II greenhouse gas accounting and has been certified by China General Certification.

LONGi also built a Zero-carbon Park to strengthen green and low-carbon awareness and encourage the participation of all employees in protecting the environment. In the future, the Baoshan plant will continue to reduce its carbon footprint by tracing its green power usage, installing PV rooftops on factory buildings, installing EV charging poles to encourage the use of clean energy, and organizing advanced training sessions on carbon neutrality for its employees.

LONGi is piloting the manufacturing of net-zero modules as the Baoshan plant strives to produce net-zero wafers by 2023, Li said, adding that everyone in LONGi understands the path to net-zero will be long and challenging but it is a “common goal”.

Li noted that PV technology can offer reliable and affordable clean energy, reduce environmental pollution and also help with ecological restoration, which play a positive role in protecting biodiversity. “We want to work with friends and partners to take solid actions concertedly to help build a net-zero future for our planet and better preserve biodiversity,” he said.

Earlier, the centre used diesel engines to generate electricity, which not only caused huge environmental pollution but also affected the wildlife habitat at night due to excessive noise.

In the future, LONGi plans to carry out more cross-industry cooperation and explore the possibility of boosting biodiversity conservation through PV technology.