Explained: What is the ‘Wakanda-like’ city that singer Akon wants to build?

In 2018, Akon, whose real name is Aliaune Thiam, announced plans to create a supercity packed with skyscrapers.

However, the 2,000 acres of land remain “completely empty” with no sign of building and only “goats present there.”

But the undeterred singer says he is trying to get the city built as soon as possible.

In an interview with BBC, Akon said that he has “a lease on the land for the next 50 years and that the current president has signed his project.”

Let’s take a closer look at Akon’s project, which he says is inspired by the fictional African city of Wakanda in the Marvel Cinematic Universe.

According to CNN, the 49-year-old says the city in his native Senegal will cost around $6 billion (Rs 49,630 crore) and have ‘stunning architecture’.

Akon City is planned to cover 2,000 acres near the Atlantic Ocean village of Mbodiene.

According to the city plans, it will initially be spread over 135 acres — and then grow to 1,235 acres by the end of the decade, as per the report. 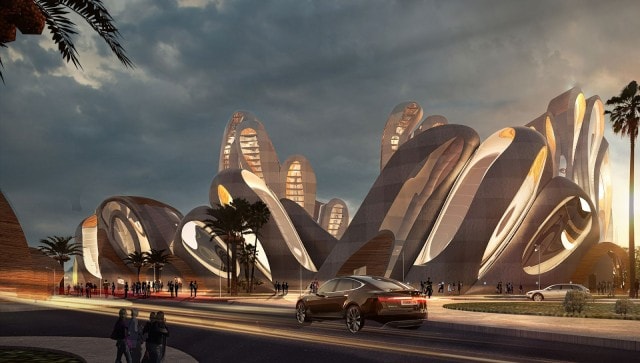 Akon announced his plans to create a super city packed with boldly curvaceous skyscrapers under his name in 2018. Akon City website

The city, which is aiming to be self-powered and environmentally friendly, is planned to have luxury condos, resorts, and a university — all constructed from locally-sourced materials.

As per The Guardian, the singer claimed this will create job opportunities for local people and serve as a haven for the African-American population who face racial discrimination.

According to Yahoo News, Akon City will have a hotel and a corporate tower which the RnB singer has dubbed the “Akon Tower.”

The outlet quoted the singer as saying that the super city will also have boating docks, a food and beverage store, a 10-000 bed hospital, music studios, and tourist resorts.

According to BBC, the first phase of the city includes roads, a campus, a mall, residences, hotels, a police station, a school, a waste facility, and a solar power plant.

Why Akon City is delayed?

Phase one, which was supposed to be completed by the end of 2023, was meant only for tourists.

The report quoted the singer as saying, “We want the big skyscrapers. My goal is to try to build something that people deem impossible in Africa, right?”

However, all isn’t going smoothly.

A local journalist told BBC that the land is completely empty and there is “no sign of building and there is just a long line of green trees and red earth.”

Despite admitting that  he should have “gotten more things in place before promoting it”, he blamed COVID-19, saying “everything would be pushed back two years.”

The BBC quoted a statement from the Senegalese administration’s tourist board SAPCO as reaffirming their commitment to the project, saying they believe in the singer and that the city “will attract tourists and investors in the region.”

Akon said that he has changed both the construction firms as well as architects, adding that the “new partners understand Africa, the terrain and have real credibility globally, as per BBC.

The singer told the British outlet the excavation work on the land will finally be starting before the end of this year.

But this isn’t the first time a grand project from Akon hasn’t fallen flat.

Akon previously said the city, which he initially dubbed ‘Crypto city’, would run on a cryptocurrency named ‘Akoin’.

Prior to the launch, Akon announced a Token of Appreciation (TOA) campaign that allowed people to donate money — which would later be converted into Akoin.

The singer in an interview with BBC told supporters awaiting refunds from his Token of Appreciation cryptocurrency campaign that they “will receive their money back, even if he has to pay them out of his own pocket.”