Davos 2023: What execs, economists are saying about crypto 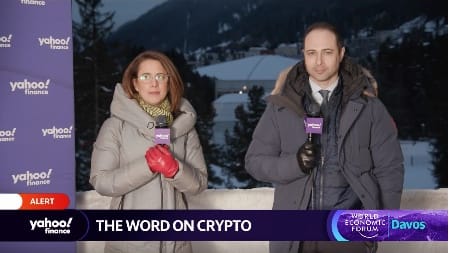 Yahoo Finance’s Julie Hyman and Brian Sozzi discuss what top leaders are saying about crypto and the FTX fallout at the World Economic Forum in Davos, Switzerland.

RACHELLE AKUFFO: Right, well, as for the word on crypto in Davos, let’s check in with Yahoo Finance’s Julie Hyman and Brian Sozzi with more on what they’re hearing on the crypto space at the World Economic Forum. Hey, guys.

JULIE HYMAN: Hi, Rachelle. Forget about crypto winter. I think it’s about 13 degrees here in Davos right now. But even though we have sort of the specter of Sam Bankman-Fried and the collapse of FTX looming over the crypto industry, even those that are represented here in Davos, there is still discussion during the panels here in Davos about what’s going on in the crypto industry. There’s a lot of talk about blockchain. That’s sort of where things have shifted. But we’ve been having some conversations about it. Among others, I talked to Jeremy Allaire, the CEO of Circle. Let’s listen to what some people had to say.

– USDC has actually grown since the FTX collapse. And it’s actually– we’ve seen other digital dollar infrastructure stablecoins have significant declines while we’ve continued to sustain. And so, you know, I think regulated, transparent kind of infrastructure like ours is well suited to this environment.

– FTX and SBF are not an exception. They’re a rule. Literally, 90% of crypto is a scam, criminal activity, total, really, bubble, Ponzi scheme. It’s going bust.

JULIE HYMAN: I mean, Nouriel Roubini is in the minority here, let’s be clear, because he also said he doesn’t think there’s anything to blockchain, right? And blockchain is actually a pretty popular underlying infrastructure for a lot of new technologies. We’ll see if he’s right.

BRIAN SOZZI: It was just such a different– it was a vibe check, I think, for the crypto community, at least here at the World Economic Forum. Day one, I walked down the promenade here, and that’s where you see a lot of companies set up, sell their wares, try to get business done, promote what they’re doing. Not a lot of crypto companies here.

JULIE HYMAN: There was blockchain.

BRIAN SOZZI: There was blockchain.

JULIE HYMAN: And there is Circle.

BRIAN SOZZI: Blockchain, Circle, yes, but again, it was a different vibe here for crypto and even blockchain compared to just a couple of years ago when all that money was flowing into the space. But alongside all that money came a lot of hype, and all of that clearly has been blown up. And hence they’re not really here in a big way.

JULIE HYMAN: Right, Rachelle, it was really interesting to talk to Michael Gonager of Chainalysis because he did talk about what happens now in the industry in a post-FTX world.

RACHELLE AKUFFO: I mean, a lot of people wondering, it really comes down to use cases. When it comes to the tokens, people might be losing faith. But even with blockchain, we’re seeing people really want to see some actual real life use cases in everyday life. So some people are still a hard sell. Great stuff there, though. Brian Sozzi and Julie Hyman there for us in Davos. Thanks, guys.